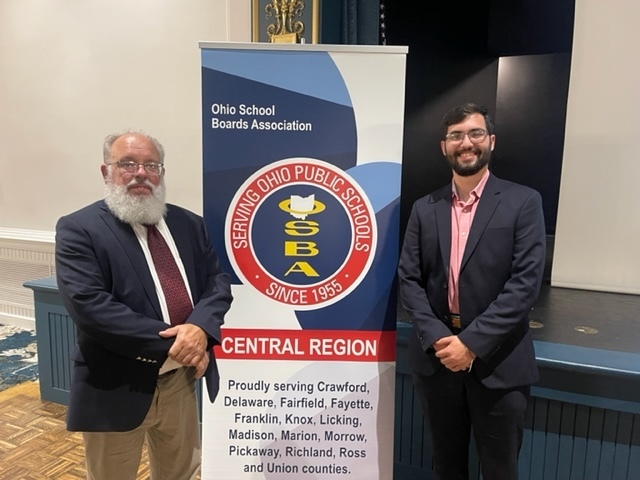 The Galion City Schools Board of Education nominated Instrumental Music Teacher Luke Warkall and community member and school volunteer Brian Treisch for awards at the Ohio School Board Association Central Region Fall Conference held at the end of September.

Warkfall was nominated for the Exemplary School Employee Award for his work as the Instrumental Music Instructor. Hired as band director in 2020, he was instrumental in expanding the instrumental music program from less than 60 students across grades 5-12 in fall 2021 to over 170 students today. Students have come to know Warkfall as an unconventional and uniquely encouraging instructor, after he enthusiastically recruited students to join the band during lunch every day for the first month of school. His dogged outreach efforts paid off, and today the instrumental music program is known as a place where students can be heard laughing and having fun, all while learning to be skilled musicians.

“Having Mr. Warkfall on our team has been extraordinary,” said Galion City School District Superintendent Jennifer Allerding. “His dedication and commitment to expanding and renewing the band program is just a small representation of the positive impact he is making on the lives of Galion students.”

In addition to Warkfall’s nomination, the Board recommended Brian Treisch for the Friend of Public Education award, recognizing his long history of working to support the students of the community and the district. For the past 40 years, Treisch has shared his love of music and worked to make a difference with the students of Galion through his position as assistant director for marching band, jazz band, GHS musicals, and the community swing band. He currently serves as the director of the Connections Committee, working to recognize individuals who have made a difference in the Galion community and raising funds to one day erect a performing arts center for the vocal and instrumental programs. He regularly attends the school’s musical performances, football games, and fundraisers alongside his work volunteering in the schools.

Ryan Karbula, Class of 2010, said of Treisch, ““Brian’s legacy will be the generations of Galion alumni he’s mentored and encouraged to take up the mantle of leadership. He has been a shining light on so many Galionites who have led exemplary lives in order to give our town’s youngest generations examples to aspire to.”